Sergius and Herman of Valaam 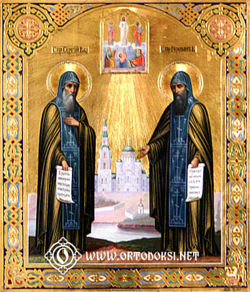 Saints Sergius and Herman of Valaam

Saint Sergius of Valaam founded Valaam Monastery together with Saint Herman of Valaam.

In tradition it is told that the founder, the Greek Sergius arrived from Byzantium to the north of Lake Ladoga. Initially he stayed at the island of Riekkala, close to the town of Sortavala, from where he moved to the island of Valaam. The island was an old pagan location and home to a site for sacrifice where many wise elders and local wizards lived.

Sergius settled to live in caves and a cave named Vaga became the Saint’s main habitation at the island of Valaam. From there he, without weapons and in the midst of violent pagans, preached the gospel and baptized the inhabitants of the island. Slowly a monastery grew on the premises and later it was to there the Karelian born Herman came and continued (not necessarily at the same time as Sergius) the work of Sergius. Herman is said to have been from the area close to Sortavala.

In some information it is said that the monastery was initially named Holy Trinity Monastery as opposed to the later name, Transfiguration Monastery. According to tradition the monastery was said to have been founded in the year 992, however, it’s a disputed date. The founding could have been in the 1100s or even as late as in the 1300s according to tradition. So any set date for the founding is not available. All dates are more or less a guess which the researchers are still arguing about.

According to tradition the relics of the Saints were moved to safety from Valaam to Novgorod in 1163 where they remained until 1180. At that point they were transferred in a festive procession back to Valaam and that date September 24/11 is still celebrated in the Orthodox Church of Finland as the day for return of the relics. The Announciation of the Theotokos chapel was later built out of stone on the location where the relics were received back to the island.