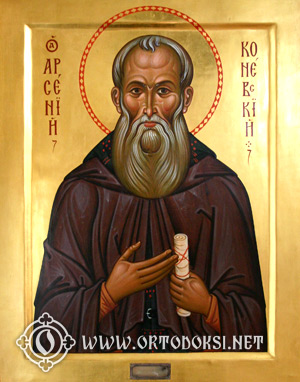 Arsenius was a monk at Valaam Monastery and according to tradition he was from Novgorod in Russia. He spent many years in Greece at the Monasteries of Mount Athos. When he returned to his native land he became a hermit and settled on an island in Lake Ladoga named Konevits. The island of Konevits was an old Karelian site of sacrifice.

At the time of the founding of Konevits Monastery both Greece and Russia were times when hesychasm was widely taught and practiced. It is possible that Arsenius brought with him from Mount Athos hesychastic thoughts on The Jesus Prayer and theosis.

Arsenius also brought with him from Mount Athos an icon of the Mother of God which the Orthodox Church sees as miracle working and a copy of this icon, most likely written in the 1500s is located at Uusi-Valamo (New-Valaam) Monastery in Heinävesi, Finland. An even more recent copy is located in the once again opened Konevits Monastery.